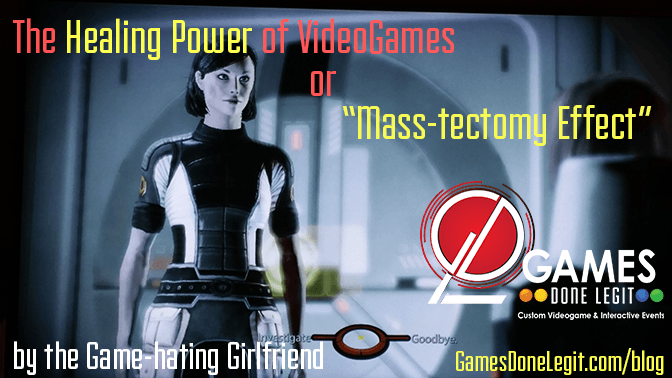 “Ughhhhhh” I groaned from the comfort of my recliner couch.  “Ow.” The mastectomy had hit me hard, and while the painkillers were working, the slightest movement of my arms or torso left me moaning. My disrupted nerve ends were burning, not to mention the bizarre phantom itches and pains my body produced as it tried to make sense of my missing breasts. I was under a lot of percocet, so I was not this coherent or upbeat during the healing process. I was in a daze from multiple medications, relatively immobile, and in need of a good distraction.

Enter Mass Effect , the first game to teach me the healing power of videogames! It took making tough choices, learning dual-analog controls, and playing 120 hours to conquer the most epic videogaming story ever.[/caption] There are lots of reasons to begin gaming. Some people are hungry for an escape from their everyday lives, while others want competition, or simply to channel their aggression onto killer robots. I had a different motivation: I couldn’t move. [caption id="" align="alignnone" width="1920"] Trying to recover from surgery and being glued to the couch felt like being in stuck in stasis, except more painful.[/caption] Part of the mastectomy recovery involves drains — terrible, terrible drains that hang out of your body. I tucked my drains into pockets in a little belt for convenience. They are truly some of the most disgusting things I’ve ever encountered. In order to remove the drains, the output of fluid (sorry, gross I know!) has to dwindle. The only way to lessen the output is to be immobile. I was desperate to get my drains out, so I was determined to rest and heal. [caption id="" align="alignnone" width="640"]

Remember those gross, weird plugs the Harkonnen have in Dune? Yeah, it was that gross.[/caption] Chris and I began playing Mass Effect to while away the hours during my month long recovery, but “the healing power of videogames” was the last thing on my mind. At the beginning, I would walk around, making conversation with the people I encountered and handing the controller over to Chris when combat ensued.

A Link Between Worlds (Gaming & Literature)

The writing and characters reminded me of many of the books I loved, but I despise violence and the killing wasn’t for me. Plus, it took awhile for me to figure out to use a modern, dual-analog controller (aiming is killer – those things are sensitive). [caption id="" align="alignnone" width="480"] 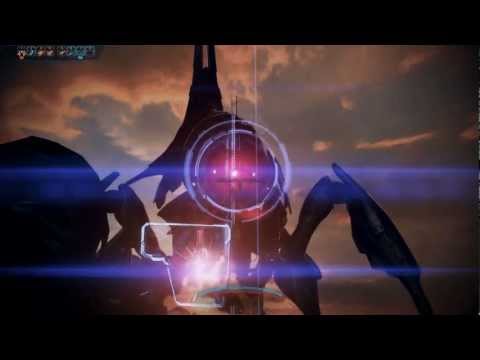 One of the many, many (almost all of them, really) shooting/action scenes I made Chris do. Damn you, analog sticks![/caption] I was immediately drawn into the story, and suddenly, my pains, both physical and emotional, faded into the background. I was Commander Shepard (female), dammit, and I had to save the galaxy.  With practice, I got better and better at using the controller, and I figured out how to shoot people! Mass Effect got me through a difficult time. Later, recovering from the next surgery, we blazed through Mass Effect 2 – I had to know what happened! Soon after we ran through 3 as quick as possible. These wonderful stories gave me something to do, a challenge to overcome, and a way to experience one of Chris’ favorite things. So thanks, Mass Effect! You made my mastectomy more bearable. I miss Mordin! Has the healing power of videogames helped you through a tough time? Have a suggestion of what game I might like if I’m ever laid up like this again (and preferably has fewer guns?) Share your story with Chris and I via the comments!]]>
Tags: healing power of videogames, Mass Effect, videogames healing

"My Girlfriend Hates VideoGames" and How to Fix that: Act 1