Videogame (one word, noun): electronic entertainment in which a player interacts with a physical apparatus to carry out influence over a virtual environment (video-), usually focused on completing a series of objectives (-game).

That’s how I define “videogames”. Many of us have been playing them since we were old enough to hold a controller. Whether it’s enjoying Mario Kart with frenemies or jet-setting to videogame competitions throughout the world, if you’re reading this, there’s a good chance you also love the newest national pastime: gaming.

But how often do you meet someone whose gaming resume tops out at Candy Crush or Just Dance?

For me, the answer is: about as often as Luigi stars in his own Mario game. But ironically, at the same time I officially started a videogaming event business, I met someone of significance who’s never heard of Metal Gear or Tecmo Bowl, upon hearing “Zelda” thinks “Fitzgerald” and not “Link”, and finds arcades as exciting as SEGA CD load times.

That someone is my charming, witty and wonderful girlfriend. And she hates videogames.

I overlooked this character flaw — she was a product of her environment — but could I analyze her love of film and literature to help her see why videogaming is a multi-billion dollar industry that’s spawned characters as recognized as Mickey Mouse?

This is the scintillating chronicle of how to help a game hater become your game lover.

Everyone likes good stories. We’re raised on them.

Stone Soup is my favorite children’s book, about some hungry pig travelers who trick stingy locals into creating a feast to share with the whole village. A: Pigs are awesome, and B: Why this tale hasn’t been adopted to be the next Cooking Mama, I have no idea.

GAMER’S INSIDER: Also, for some reason I picture Stone Soup’s village square like the one in Resident Evil 4. I can see the pigs upon arriving and seeing it deserted say, “HUHMPH, where did everybody go? BINGO?!

Anyway, great stories uplift us — we share the triumphs and failings of our favorite characters, and classic stories reinforce the values we treasure in humanity and in ourselves. The question was which gaming stories that have stuck with me for years could grip her the same way?

I made potentially catastrophic mistakes early on. CastleVania, Metal Gear, and the SEGA CD Lunar RPGs are my favorite game series, and her introduction to each was near disasterous.

I Blew It, A: My online gamertag from my competitive gaming days was “Ghaleon”, taken from a character in Lunar, which was a huge dork-strike against it immediately. Japanese RPGs are also meant to play, not watch, so Lunar stayed on its place of honor on my games shelf.

I Blew it, B: Thinking cinematic spy excitement (with literature-esque themes and overcoming-human-nature subtext) would grab her attention, I fired up 2003’s still-gorgeous and compelling Metal Gear Solid 3: Snake Eater.

But she was practically falling asleep after the second radio conversation. 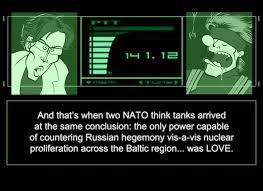 As The Boss clumsily spills out director Hideo Kojima’s “Scene” theme in her introductory scene, my girlfriend blurted out crossly, “Why does any of this matter!” She’d apparently heard enough about why “a soldier is a political tool, nothing more” before seeing the main character actually do anything yet.

Explaining that Kojima is not a master of subtlety was moot.

I Blew It, C: She was not amused by the hilarious, infamous “Die, Monster!” voice-acting conversation that opens the immortal CastleVania: Symphony of the Night.

ProTip: If you ever want to convince someone that videogames have a modicum of artistic value, the line “What is a man! A miserable little pile of SECRETS!” will not win you any arguments.

A New Hope: So I said to myself, “OK. Before she’s convinced forever that videogames are just for basement-dwelling dullards who survive on EasyMac, pizza and MTN DEW, what does she love about movies and books?

Mass Effect was just what the Commander ordered.

Reader Got Through Act 1

Check us out at GDLent.com, or @GDLenter on Twitter. See AMESOME gaming pics on Instagram at @gdlent. OR just text GDL to 22828 and you’ll be in the loop! #WARPwednesdays Please consider subscribing to our site weekly newsletter, too, to stay in touch with upcoming events and contests!
Online Form Creator
by Chris Hatala]]>
Tags: video game girls

“The Healing Power of VideoGames” or “Mass-tectomy Effect”