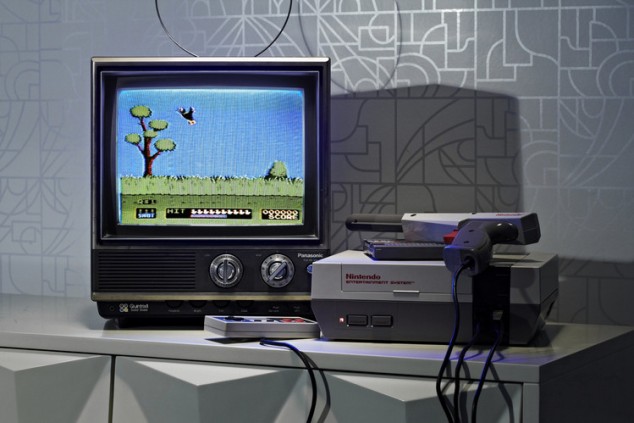 We’ve all had a tough two years in different ways (me very included), but I think we’re all trying our best to get back any sense of normalcy, both at home and at work.

I haven’t had much to do for corporate events for 2 years now (pandemic, brain surgery, then a 2nd baby). So a recent “back to work” party where Duck Hunt was as popular as always just gave me pause. I kind of forgot what it feels like to see people light up and hear their stories when they see a lineup of classic videogames unexpectedly appear at their office for a few hours.

But…why is that? I just take it for granted that videogames (like Duck Hunt) make you feel awesome and provide a unique way to bond with others, because it’s been important to me my whole life.

But it’s interesting to explore why these gray and black little boxes are standing the test of time and seem to spark just as much joy now as they did 30 years ago.

“Nostalgia” Obviously is Part of the Answer

When almost anyone of working age sees an ’80s/’90s bulky TV, a Nintendo Entertainment System, and a Zapper lightgun, with Duck Hunt brightly illuminating the room, they seemingly can’t help but smile and mosey on over. 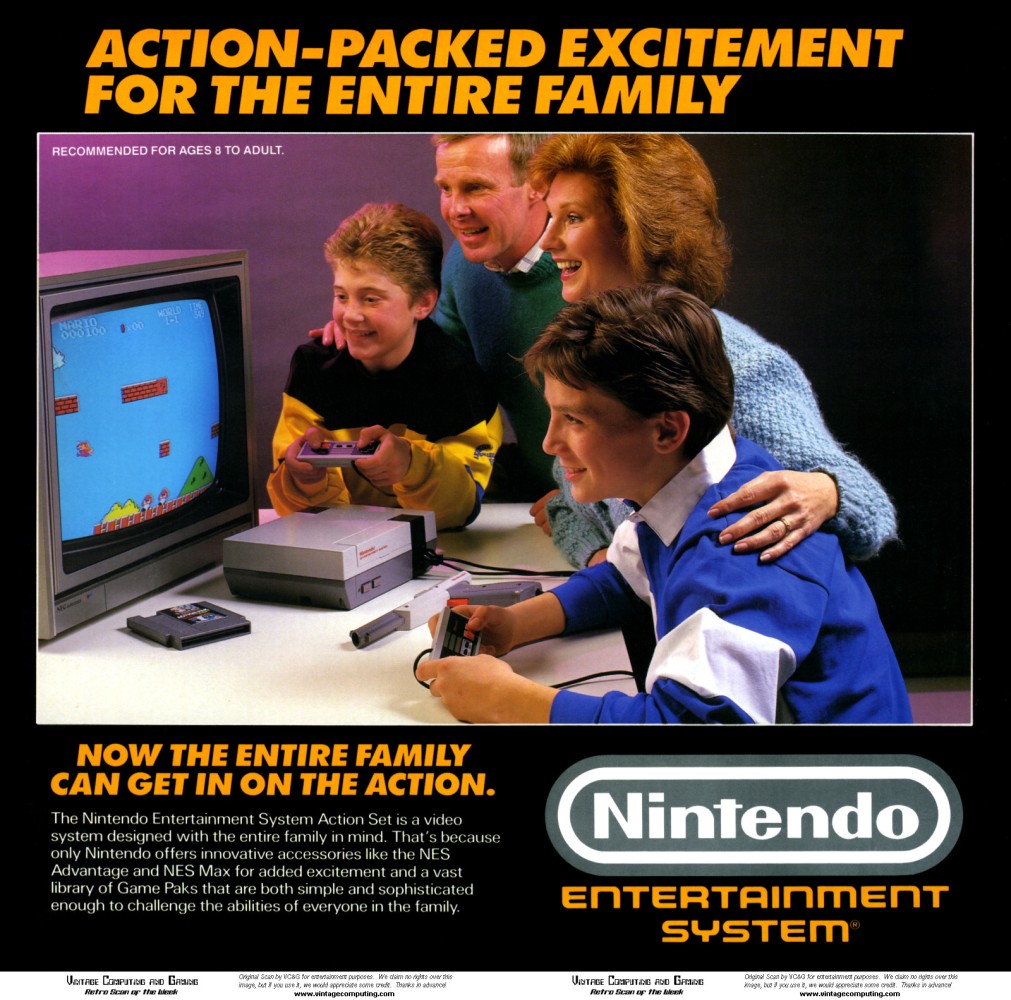 I like how they shoved the little brother off to the side so he can’t even see. But seeing as how jazzed he looks despite not even playing, maybe he’s just happy to be there, considering the NES cost at launch was the equivalent of $788.39 in 2022 cash.

It’s not just people who had a ton of games or had no other hobbies (er, like me) — it’s almost everyone! People who only played Duck Hunt at the demo machine at Toys R Us. Women who discovered Ms. Pac-Man in high school. Guys who had a Goldeneye parties in their college dorm. Even people who only got to play Nintendo at a friend’s house down the street like thrice a year. 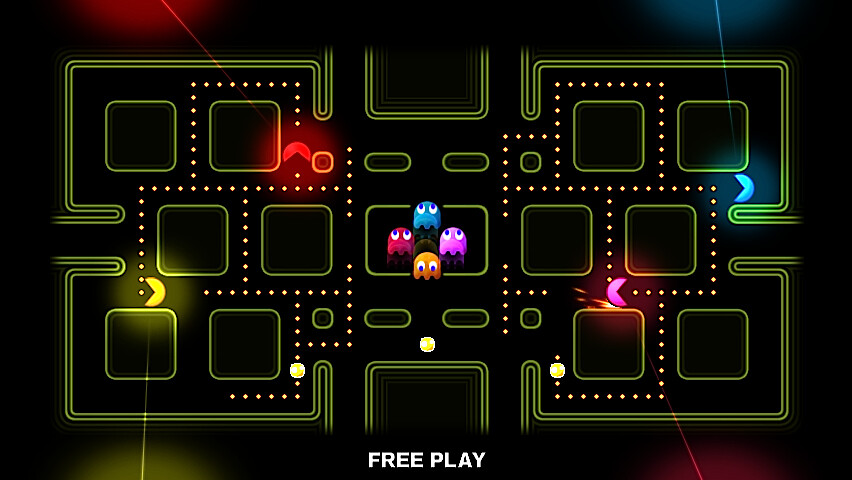 The Pac-Man best for events is the 4-player free-for-all called Pac-Man Battle Royale. There are lots of multiplayer versions of classic games that work better for parties.

How Videogames Work With Our Memories

Everyone seems to have a story about videogames they loved and the social experiences that came with them; they always share similarities, yet they’re all intensely personal and unique. They’re core parts of their formulative years — core parts of who they are today, even if they haven’t played a game since Wii Sports 15 years ago.

I made this complication of our recent event. Just great seeing people enjoy old videogames like I hope they will!

Between the art, graphics, and the fact that you control what happens, people certainly connect to videogames in an even stronger way than with passive or reactive entertainment.

I mean, I really, really love Queen and Star Wars for instance, and I’m extremely connected to both pretty emotionally.

But I didn’t help make “Bohemian Rhapsody”. And though I feel like I’m with Luke when he blows up the Death Star, my brain still knows I’m a passive observer.

But when I play “Bohemian Rhapsody” on piano and/or sing it, I’m actively bringing something small into the world myself for a few minutes. I feel so much closer to what it must have felt for Freddie Mercury to write it and perform it when I perform it, too.

Likewise, if you’ve ever played any of the Star Wars arcade games and got to feel like you’re dramatically saving the galaxy to the John Williams’ triumphant score, I dunno, it’s just a different feeling since you were a participant in the triumph and not a viewer. You “did it”! 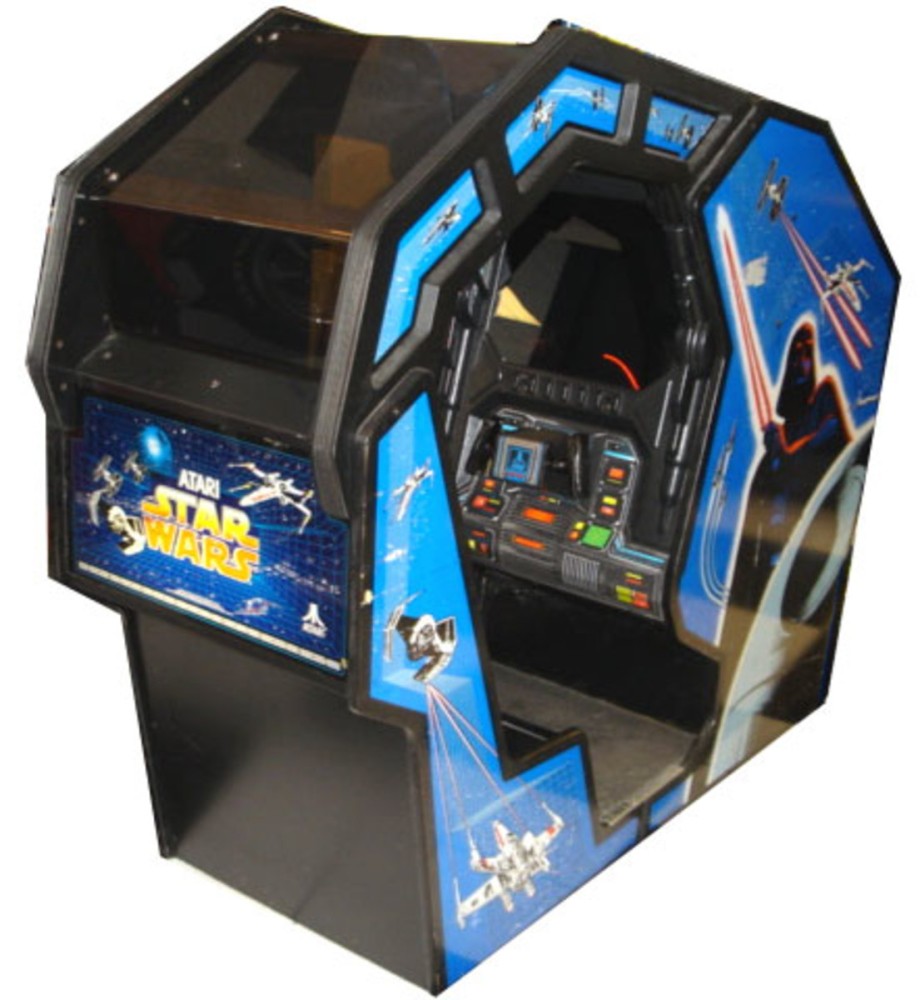 Who didn’t want to do the Trench Fun in their own X-Wing when they saw this in 1983, even though the graphics looked like a “My First Shapes” toddler workbook?

I heard a talk by one of the game developers here in Cleveland and learned that our brain maps the experiences we have in videogames as if we actually experienced it.

Ever think about how you never say “Mario beat the level”? You say, “I beat the level.” I think that kind of tells the story. I know there’s more to it, but that’s pretty damn interesting, and probably explains our emotional reactions to videogames.

Duck Hunt is a Officially a Shared Experience

It’s just really cool for me to see over and over videogames don’t have had to be the driving force of your life for you to feel so attached to these pixely games from your past.

By now, as each generation picks up the previous one’s love for Mario and Sonic, I’m starting to feel sure I’ll be able to see folks enjoy these gaming treasures for a long, long time.

Here are More Sights From This Event! 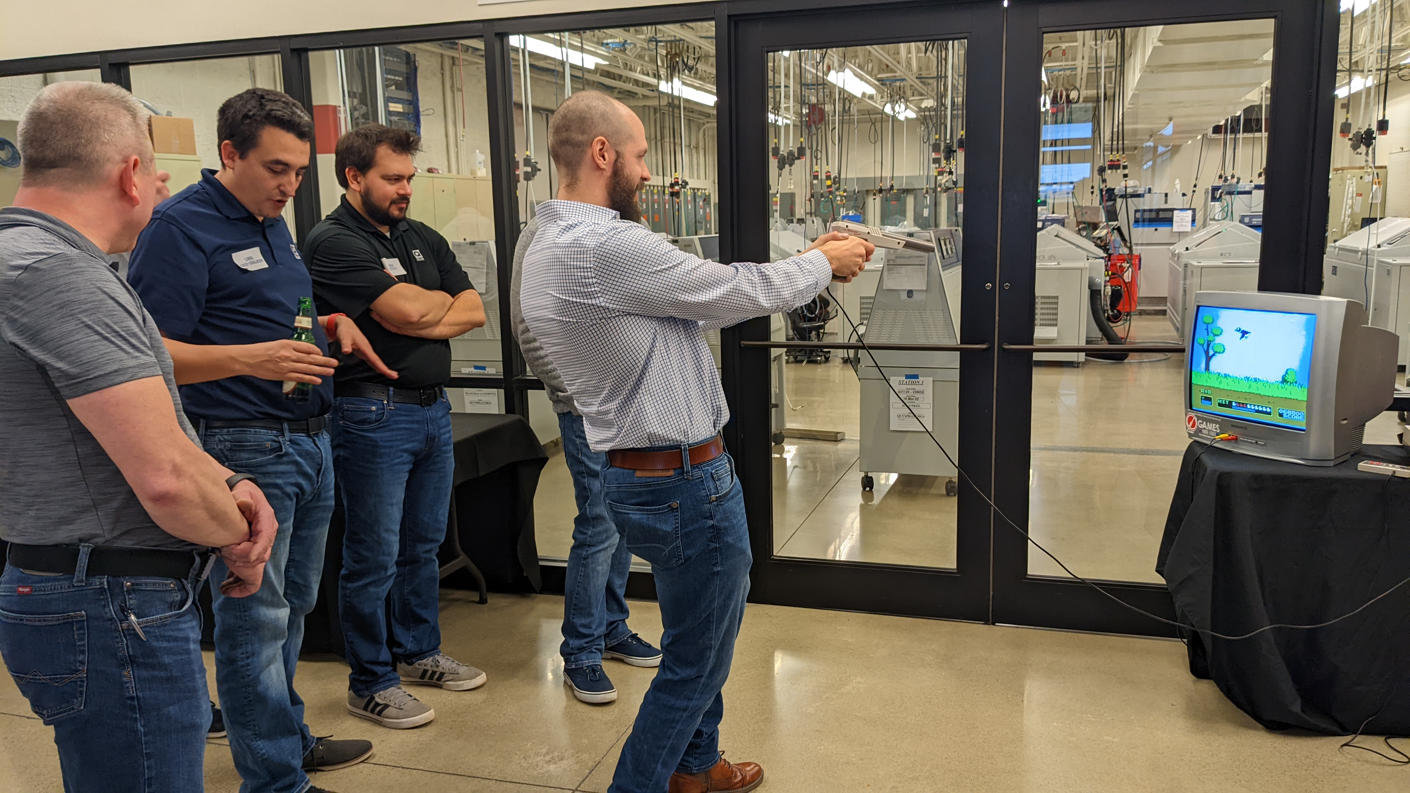 It’s not the first thing you’d think of, but after doing this since 2013, I can say without a doubt that Duck Hunt is unofficially the most popular videogame of all time.

And no one can even play it anymore, unless you’re crazy like me and kept your tube TVs! (I was hoarding CRTs and videogame stuff before I started Games Done Legit, as part passion, part preservation, and part running videogame tournaments that required them).

There aren’t many games of the mid-200os people can say, “Yeah, even my grandma played that!” besides Wii Sports! (Maybe Guitar Hero/Rock Band). Post-pandemic, I’ve been setting out Wii Sports and it’s always a huge hit. It’s still pure Nintendo magic — anyone can play and love it! 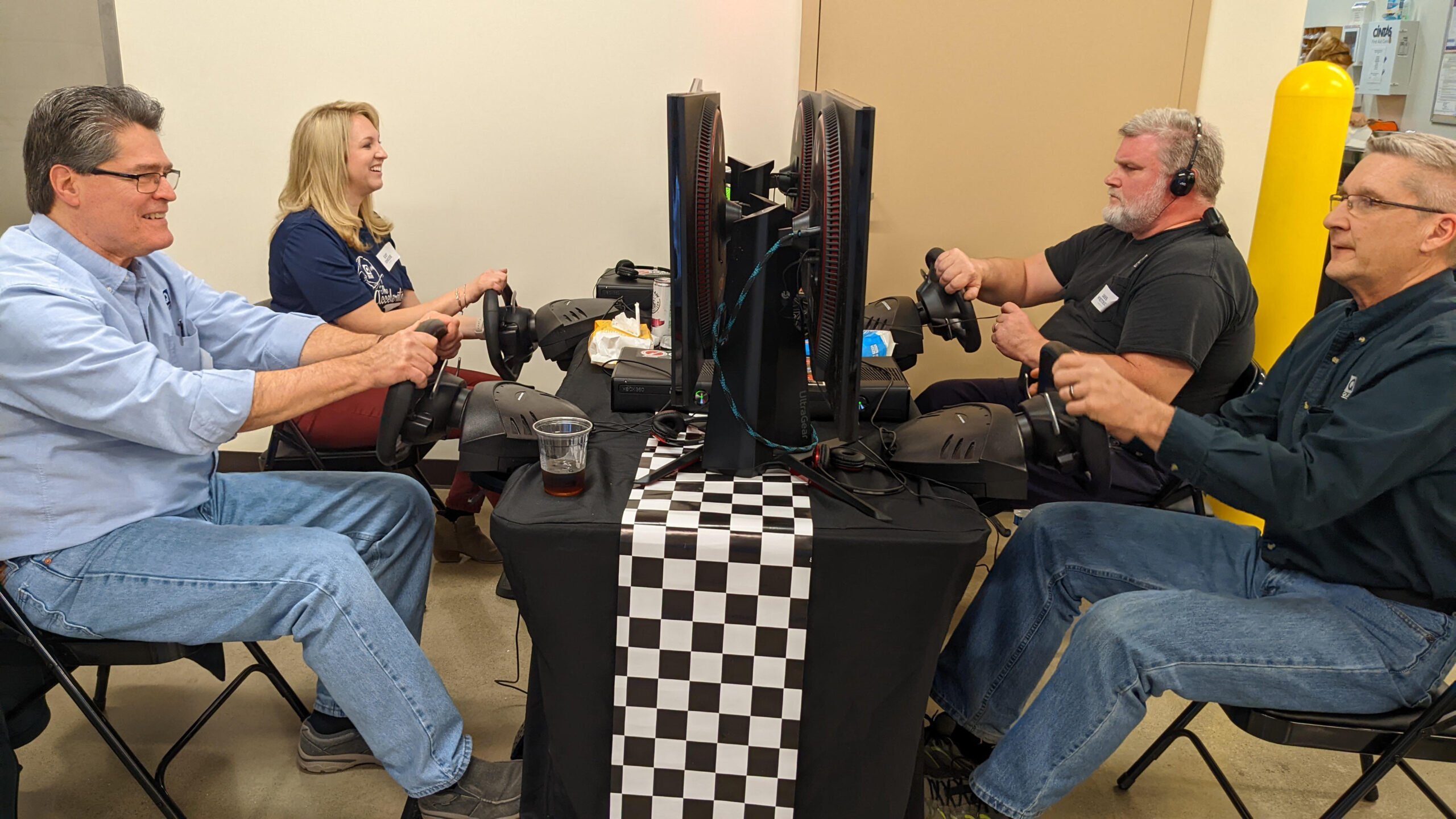 A 4-player Ferrari Racing Zone — all you need is 6-feet x 6-feet for an awesome raceway! 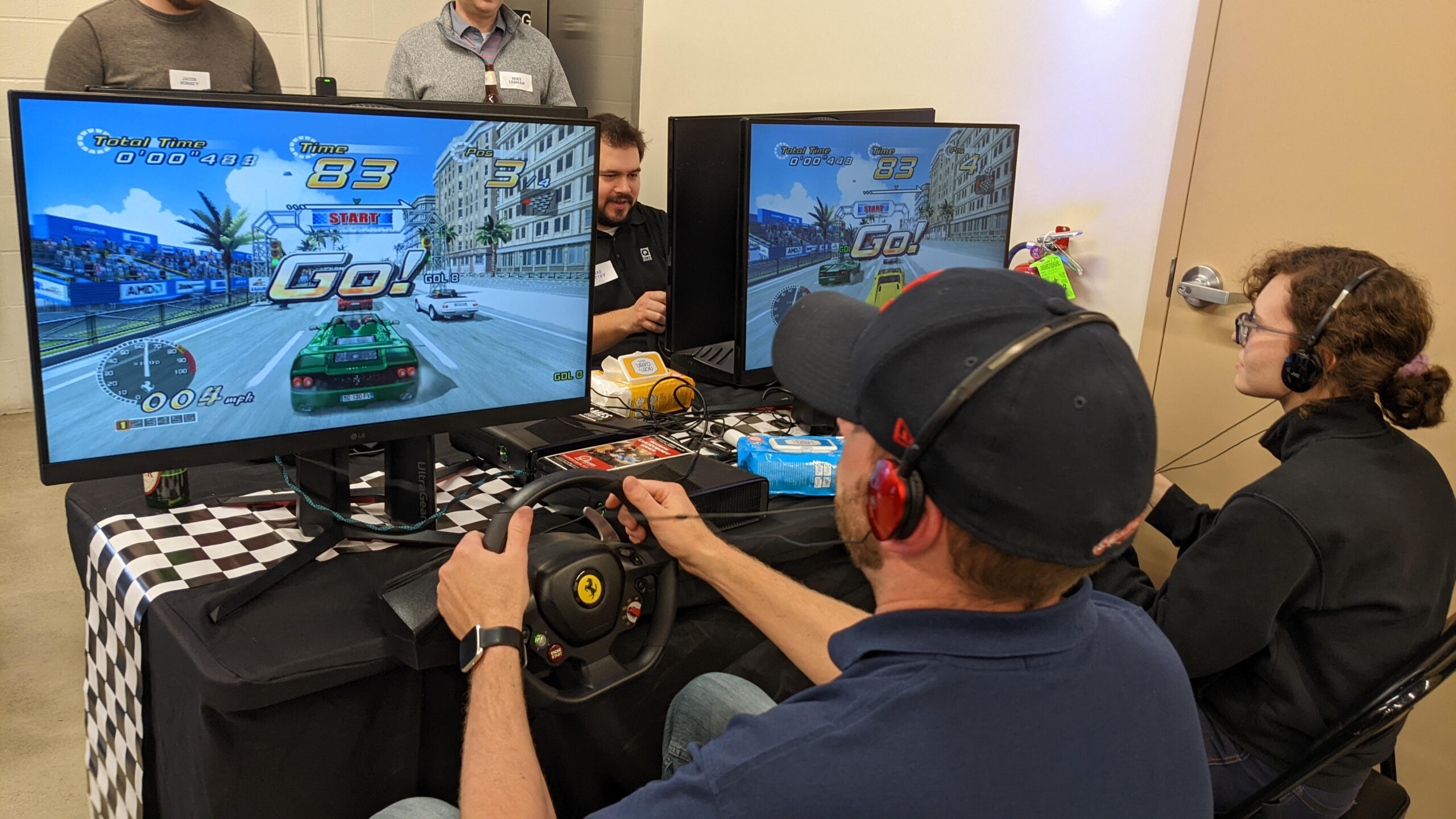 OutRun2 is the greatest arcade racer of all time, and I’m so delighted people respond so well to it! I could devote a whole blog post on why it’s No. 1, but another time! 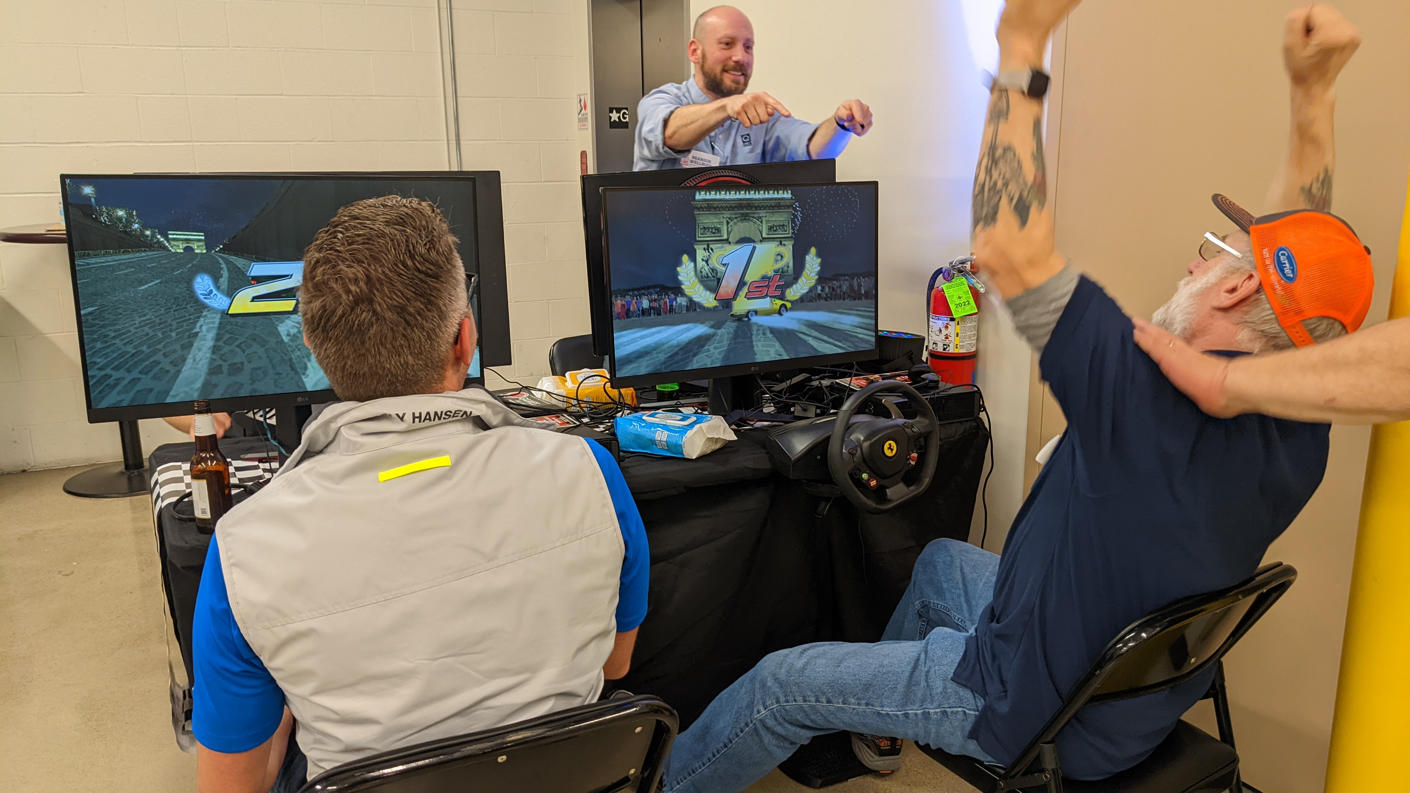 “A Winner Is You” — Pro Wrestling, NES 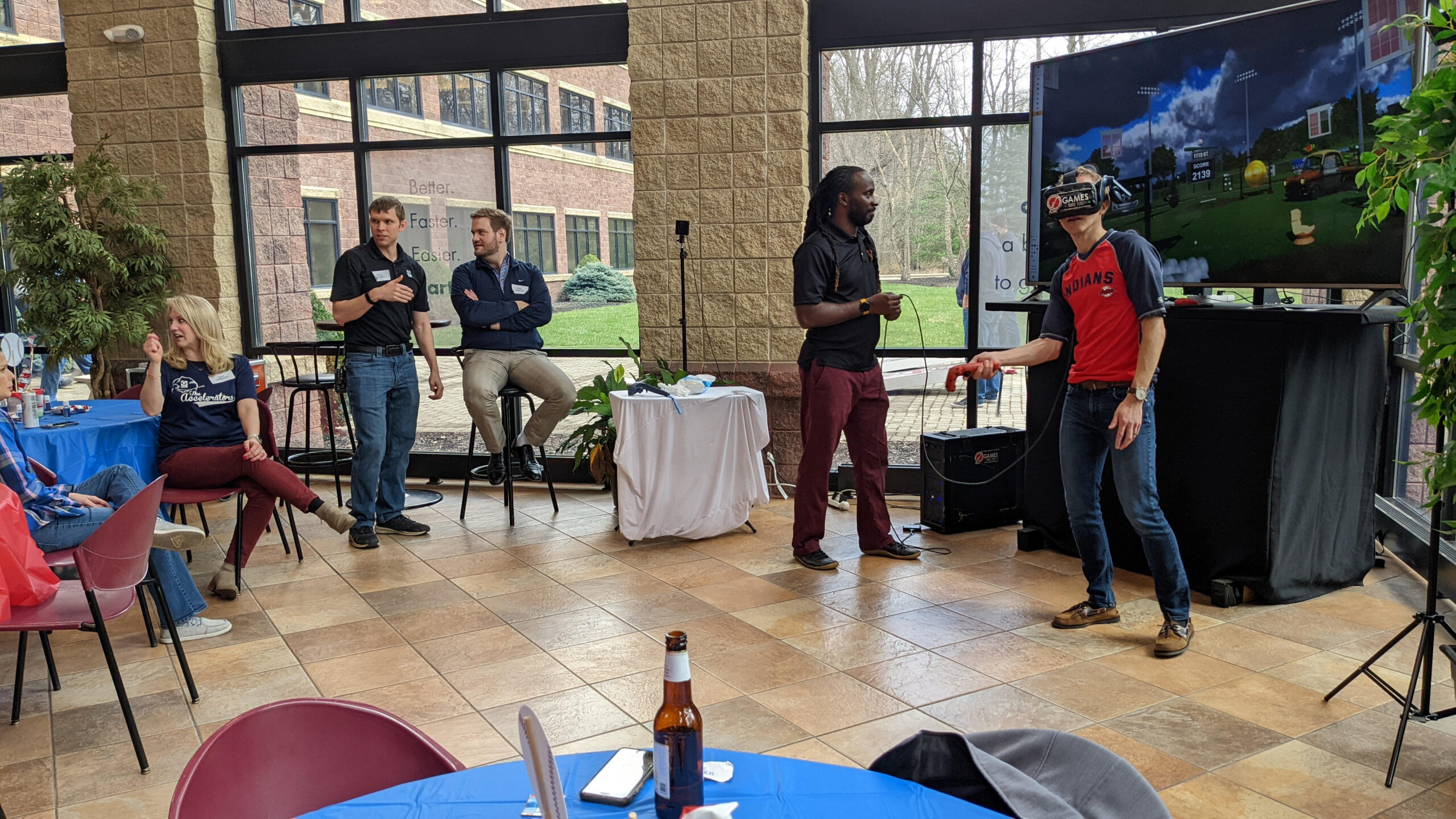 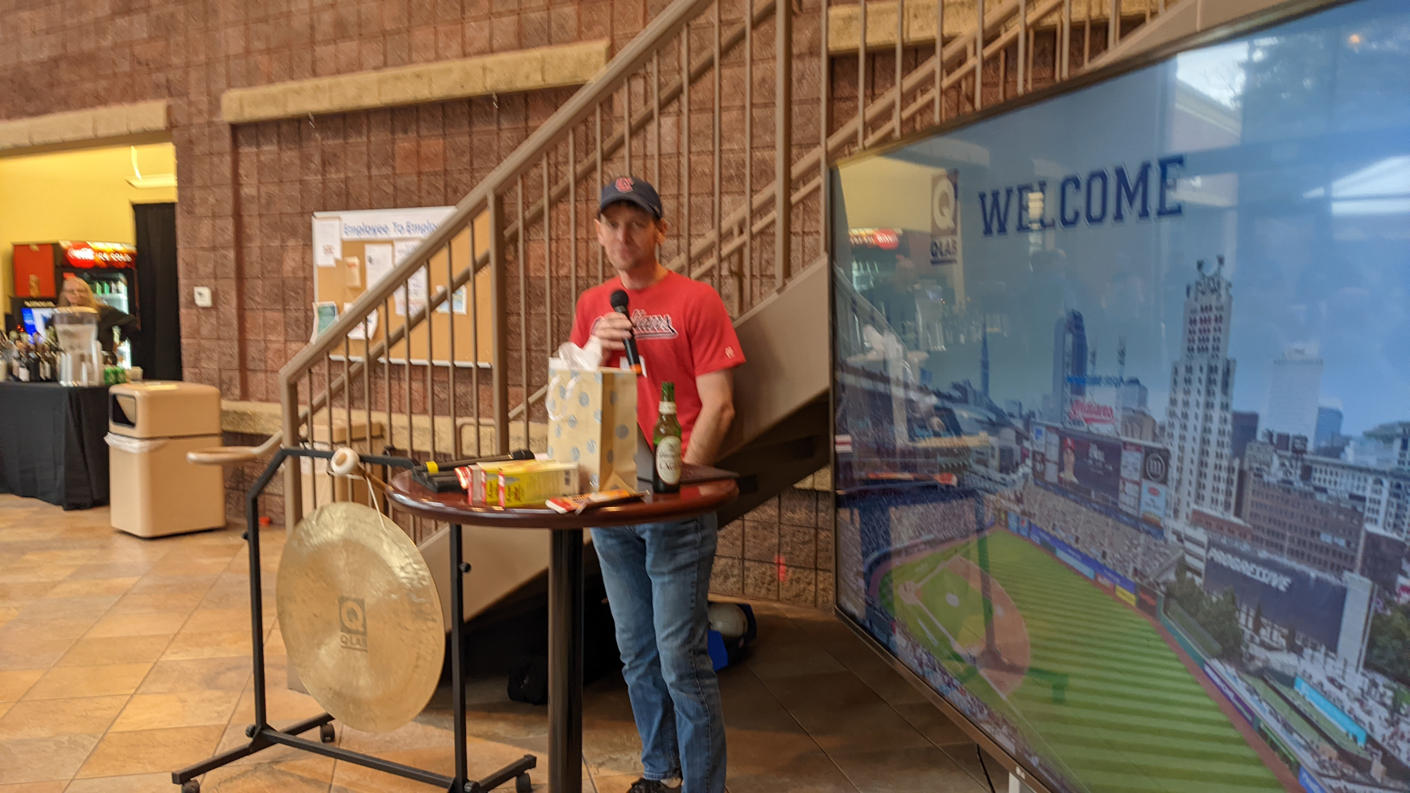 My friend who works at the company and is a walking sports encyclopedia ran trivia in the main VR area — a great touch to an awesome event! 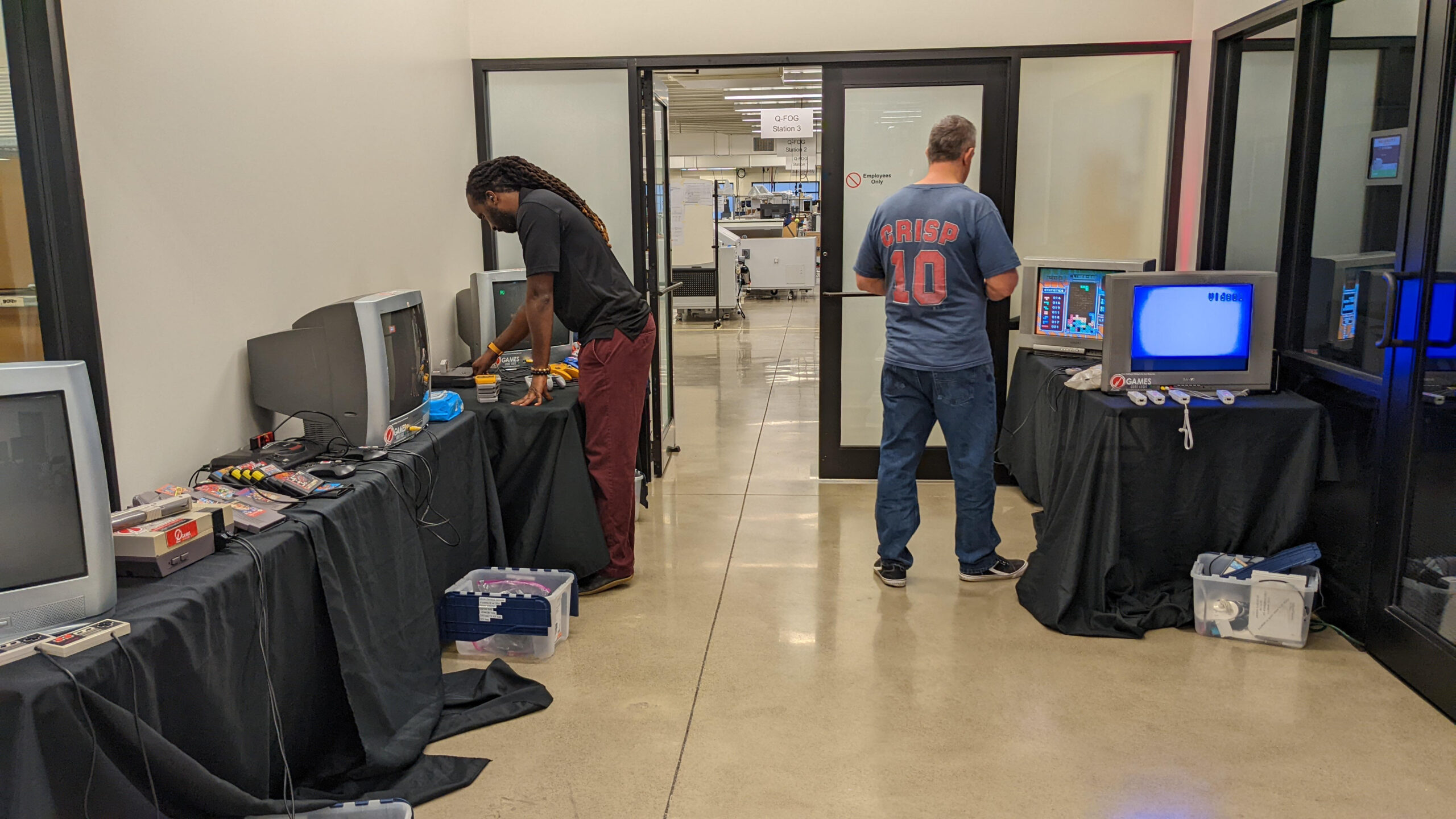 I guess it’s a sign someone had a really great time when they stay until they forced to leave, like a little kid would, haha. Tetris can have that effect on people. 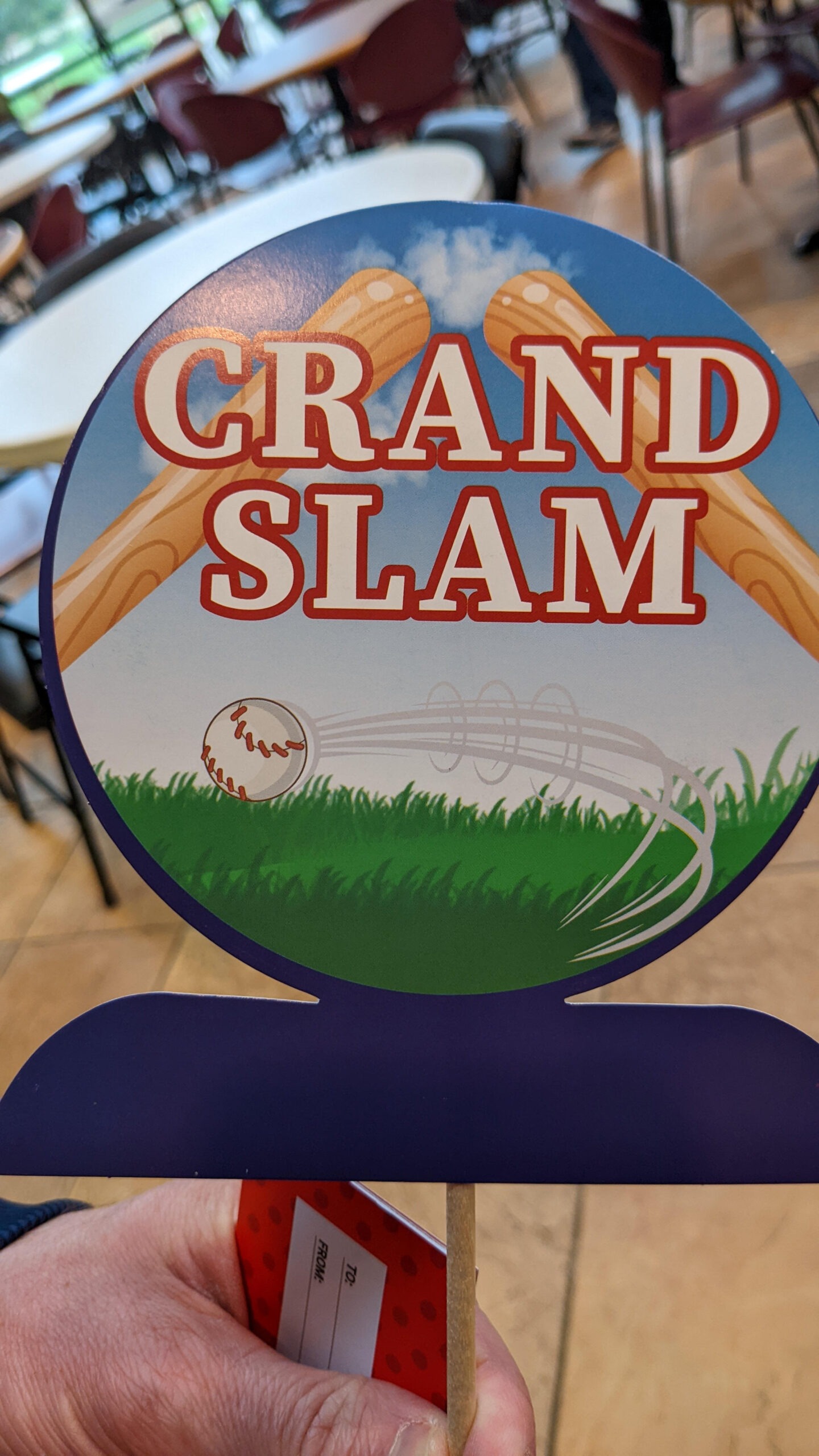 C’mon, Amazon! My wife is right: you’re obviously selling too much stuff from China these days! “CRAND SLAM” indeed.

If you’re coming back to the office and need some smiles too, please contact me anytime!