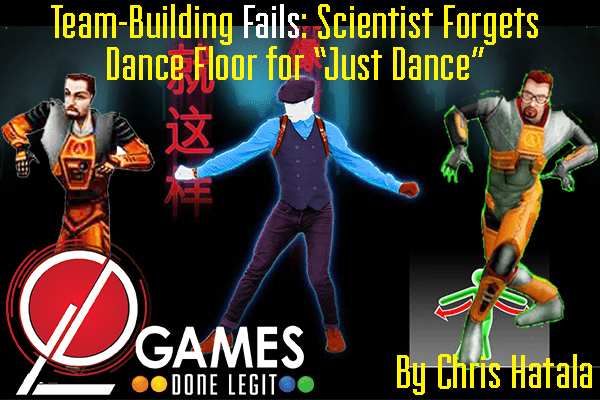 When hiring corporate entertainment, would you hire a dentist to do a comedy routine? An electrician to make balloon animals? What about a scientist to lead a group in a Just Dance team-building session? 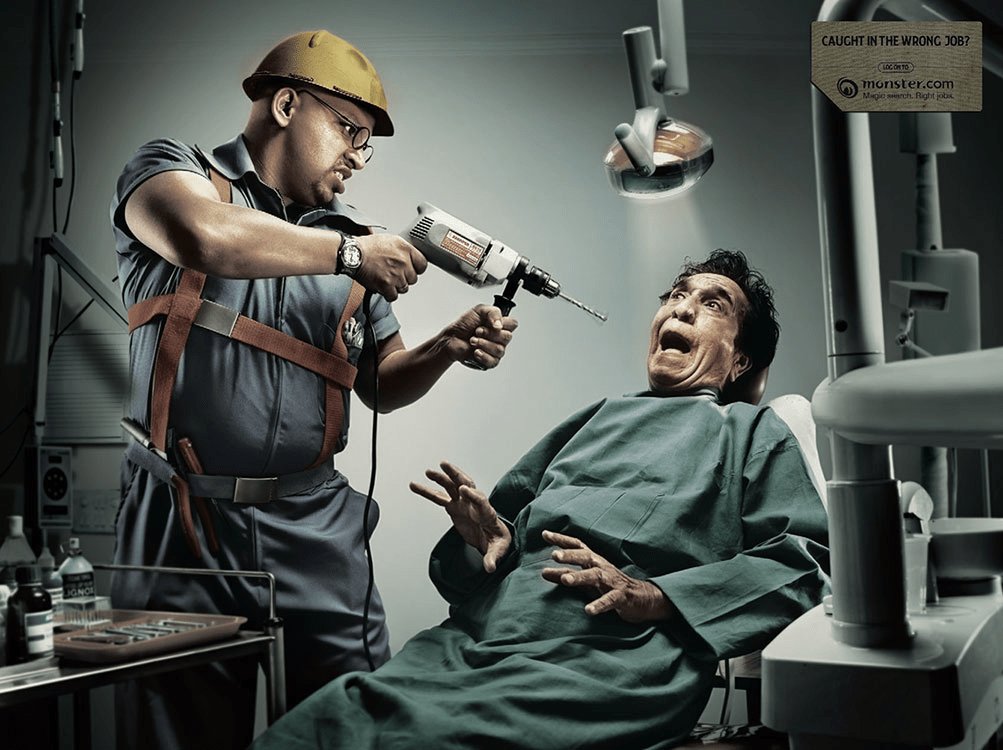 I am in general an extremely positive person, so this post risks a bit of me looking like a jerk. But I promise, it’s from a place of love and learning, and I’m looking out for you. And, how do you feel a craft you take pride in is kind of butchered by someone else? And they’re happy about it?

I was looking on LinkedIn (connect with me anytime!) for some team-building news or content to share with you, and like magic, I was notified about a trending team-building post at which “I should comment on as Games Done Legit“. As soon as I clicked on it, though the creator doesn’t mention the game, I knew exactly what they were playing!

You probably know what Just Dance is; hell, you’ve probably played it with your family.

Factory-floor party we did a few years ago. They were feeling it!

It’s kind of the spiritual successor to Dance Dance Revolution, but instead of needing a pad or mat, you simply try to mirror the dance moves characters are doing on screen with your hands and feet, while dancing to pop music across the ages.

And, for those who suck at real dancing (like me), everyone is looking at the screen and also trying to follow their character, so no one has the worry-bandwidth leftover to feel self-conscious about how they look.  it’s basically the perfect modern party game that all ages can play together. 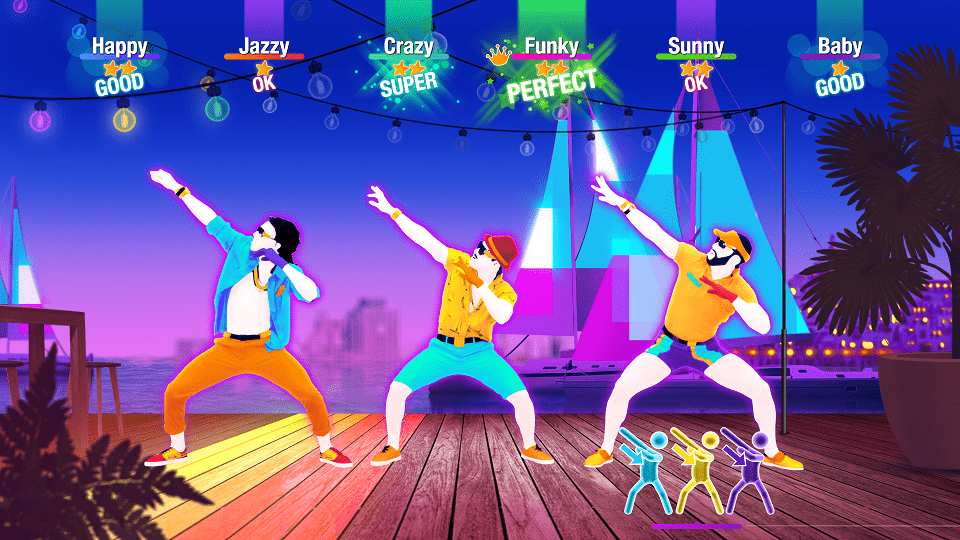 Just Dance: They look cool so you don’t have to!

So I was delighted to see someone whose business makes way more money than mine setting up a Just Dance session to break up the grind of an all-day training. It’s a great post too because it shows and sells what he does at the same time without being annoying about it.

So I woke up today thinking, maybe I’ll just share that post I saw yesterday and be like, “Hey, this guy is science-y and business-y but uses one of the same activities I do for team-building!”

I about to do that and call it a day when I watched the video one more time with fresh eyes. And I noticed something.

The facilitator and his associate in front seem to be the only people having a great time.

There’s a few people laughing, but it looks like it’s either directed at the silly characters on-screen or the facilitator’s enthusiasm. The cameraman tries to egg on the crowd, but no one is responsive (because do you dance because someone asks you, or do you dance because you want to?).

Someone trying to make you dance generally has the opposite effect.

Based on the post’s raison d’etre — that physical movement stimulates brain activity — if this were me, I wouldn’t be trumpeting this a success.

Why weren’t folks responsive to this exercise, when I do Just Dance all the time and don’t need to ask or demonstrate to people to have fun — once we’ve set it up, they just do it on their own?

Most of that group looks as enthused as I would when a kid at school event would want to hear “What the Fox Say” for the 12th time.

The folks here were not put in a position that could allow them to enjoy it in the first place.

If you’re going to ask people to swing their arms and feet, you can’t do that in a college lecture hall. These people are right on top of each other, so no wonder they just awkwardly move their arms in front of them like T. Rexes — that’s all they have room for! They need to be spread way out.

You might as well try Just Dance with these guys too and see how it goes.

Since there’s not enough room for everyone at once, you need a way to involve everyone while still making sure that each person gets a chance to fully do the activity.

One option I’d do would break them into teams by some differentiator, and have each group “perform” a song together and be “judged” by volume of crowd clapping/yelling afterward, criteria being something silly and non-dependent on actual skill, like having an “enthusiasm championship”, and give certificates to the winners. (People love having an event takeaway and way to remember they won something).

See? They look like they’re having a pretty good time judging their colleagues!

Also, Just Dance for groups works much better when everyone is on the same floor, because we’re implicitly familiar with real dance floors and line dances, so that physical setup further links the activity to something known in your brain, so it allows people to natural about doing this activity in a new space, with new people. 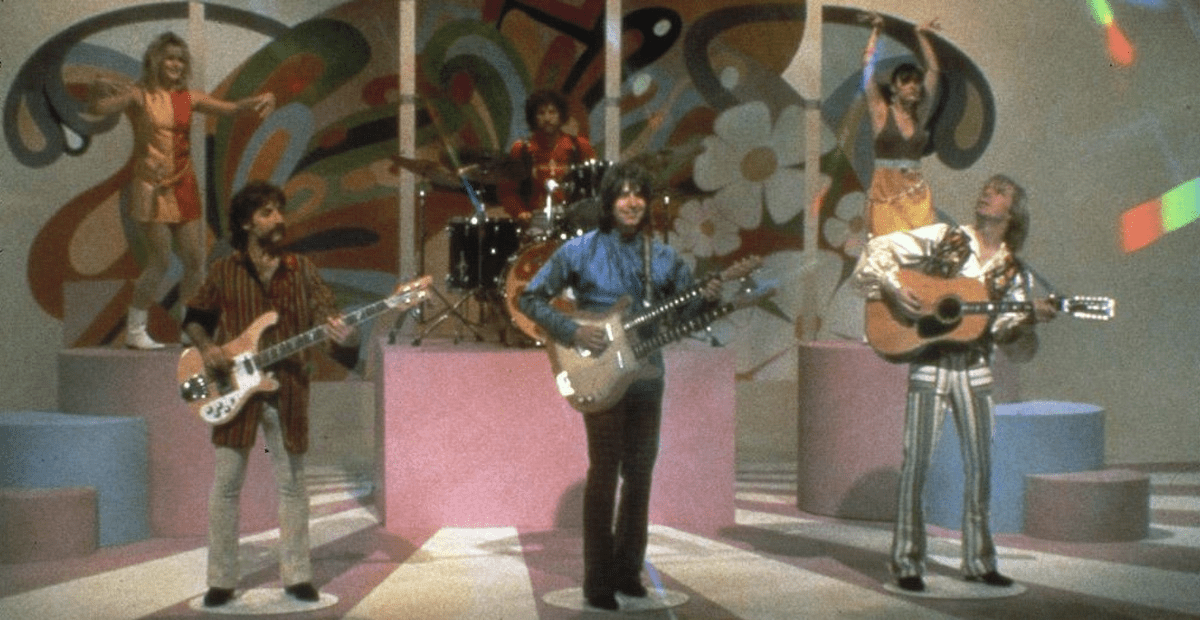 ’60s-style music videos are maybe the only time good reason for dancers to be on different tiers. Because it’s hilarious.

Instead, he’s telling us what “happened” (everyone had fun and their brains are more alert now because they moved), so he’s setting up our brain to expect to see that when you watch his video. When I viewed it a second time and a day later, I could see this was not the result at all. (I don’t mean he did anything devious, but he is a neuroscientist and a businessman, so he knows how to set the mental table for us).

Putting my money where my mouth is, I left him the feedback and suggestions I’ve listed here in the most respectful and deferential way that I could, which you can find in that comments section, and I’m 98% sure he will ignore them (which is fine).

I’ve been setting up videogames for others’ entertainment since I was 9, when I started bringing my newer game consoles to my best friends’ house so they could enjoy something they didn’t have (and, though I didn’t know this at the time, something their family couldn’t afford).

I’ve been doing this so long, I think these glasses might be fashionable now.

I set up it on GDL’s very first bar mitzvah (an orthodox one no less… I was surprised to see that Just Dance didn’t count against the boys-and-girls-can’t-dance-together rule; even Grandpa — cane and all — loved it), and I still use it at corporate events all the time. It gets people moving and laughing, and everyone likes pop music!

I was so nervous while planning our first bar mitzvah back in 2014, but it all went great and the family was so happy! Just Dance was a much bigger hit than I’d even hoped; the whole family — all ages — was into it!

Fun doesn’t happen by accident or because you tell people to have fun. It needs to be planned, executed, and cultivated as thoughtfully and skillfully as the rest of the event.

In other words, I take your fun extremely seriously!

I like nothing more than seeing people enjoy themselves and their time with others because I set the stage for it to happen, and I truly appreciate every chance I get to bring fun and energy to the workplace!

I hope I can help you to maximize your employees’ fun sometime soon! Click if you want to talk!