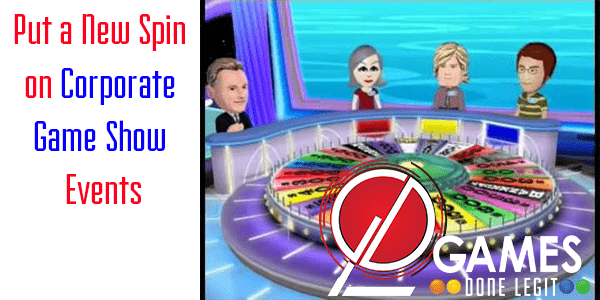 The corporate game show event theme  is one of the oldest around. So how do you keep your theme but deliver something new and engaging for employees?

The Wii versions of the major game shows ending up being the best choice for letting people feel like real game-show contestants to corporate events.

Almost all the corporate calls we’ve gotten since I started Games Done Legit have been about one issue: “We’ve done the same X activity for years – this (i.e. Games Done Legit] looks interesting – what can you do for us?”

So delivering something new and different gets our foot in the door. Now, we’re faced with wowing the client in Year 2 and beyond.

I feel a deep obligation to elicit a “Wow, I’ve never seen anything like this!” response from our clients and guests, year over year.

Now, the easy/safe/smart thing events companies do is come up with a “thing” and you do that “thing” for every event.

But if I wanted to do what was easy, I’d still have a desk job! I definitely would not be going through the grind of creating demand for something people don’t know exists because no one’s done it yet!

So for 2018’s KSPT Annual Awards & Appreciation night, we were tasked with “We have no idea what you can do for this, but we’ve settled on a game show theme.”

Since I’m such a fan of videogames, my natural approach to events is: How can we actively engage the most amount of people through fun technology at once?

I went all the way back to original Nintendo and the myriad of game-show videogames. (Double Dare, above). They’re all as terrible and not fun in 2018 as you can imagine. (Besides Anticipation, which remains amazing.)

Anticipation is for real.

I did some research on the newest Xbox One versions of game shows, hoping that advances in technology would result in, say, a digital Richard Dawson hosting your Family Feud game. No dice. (Apparently no videogame company wants to pony up to the estate of passed-away game-show celebrities.)

And the Xbox Kinect, while an amazing piece of hardware, is still not utilized well in actual videogames.

The Wii versions of game shows ended up being the way to go, even if the “Wii talk” function is totally unusable at special events.

Everyone can use a remote control, and hence a Wiimote!

You actually “spin” the Wheel using your Wiimote — much more fun than pushing “A” button.

And the low-quality graphical representations of both your homemade on-screen avatar and of Alex Trebec and Vanna White are charmingly hilarious.

For the main attraction, Quiplash is pretty much the technology-age evolution of the game show. It’s like Apples to Apples / Cards Against Humanity, except everyone is writing their own answers and prompts, live, via smartphone!

Your mind wanders to inevitably-off-color places during Quiplash. But at work events, even with alcohol involved, everyone self-censored themselves since they still know it’s a work function.

Most importantly, instead of merely watching the action, spectators (up to 10,000!) determine who scores big points – not the players.

So far, whenever we use Quiplash for a corporate group, we personalize the prompts we write for the company, and people seem to really enjoy it.

We’ve actually found a number of new programs to augment corporate meetings and training that the audience can have a role in using their smartphone. Everyone has a smartphone – why not leverage that to bring hundreds of people together into the same activity?

One of the best-kept secrets in Cleveland DJ entertainment is Frisky Entertainment, in my opinion!

Even if you can’t operate a videogame controller, everyone can use a remote control, making the Wii the perfect videogame console for these types of events.

Foosball is requested every year at KSPT, no matter the theme!

The HR team at KSPT really went all in creating some really fun decor. Price is Right nametags for guests, this incredible Showcase Showdown podium, etc.! These should be on Pinterest!

Quiplash will be a staple at Games Done Legit training and team-building events for years to come, I think!

The HR team created their own activities to complement everything we had going on there, too! They put a lot of energy into “Come on Down!” events in the middle of the ballroom where you never know when your name would be called to compete for prizes as varied as 20-packs of Maruchan Ramen to Xbox consoles.

I hear from HR professionals all the time that “We’re always looking for new ideas!” so I need to do a better job of showing people what the new ideas from Games Done Legit actually are.

I hope this provided a little insight into what a corporate game-show event theme can look with modern ideas! Can we help make your event theme feel brand new again?

Why Duck Hunt and Nostalgia Work So Well For Office Events